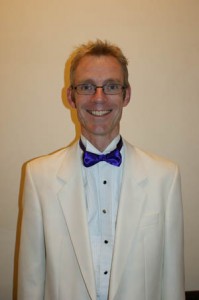 David Blackwell graduated from Cardiff University in 1988 having studied music under Alun Hoddinott and specialising in composition.

He is now Head teacher at a primary school in Derby, and holds the post of Musical Director with several amateur musical societies, including The Burton Musical Theatre Company.

David is also Musical Director of The Prebendal Singers, having joined them as the Midland Cathedral Singers in 1979. The choir perform regularly around the United Kingdom and have played under a variety of previous conductors which have included Nicholas Kok.

Brass music has always held a strong interest for David, having played in the National Youth Brass Ensemble and toured Venice in 1989. He has been directing Derventio Brass since its formation in 1993.