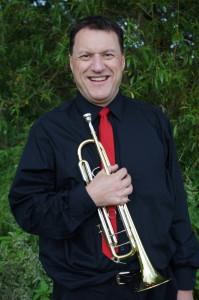 Mark is from a musical family – his parents and some relatives were dedicated brass band players. Mark has played music from an early age, taking up the trumpet at age 10. He played in the Derby Music Centre and Derby Youth Orchestra for many years, and joined the University of York Big Band in 1988.

Over the years, Mark has played with various musical groups, including concert orchestras, wind bands, big bands and has performed in orchestras for numerous shows for local musical societies.  He has also been known to turn to “the dark side” – acting – and since 2010 has been seen on stage in The Pirates of Penzance, Jekyll & Hyde, Oliver! and HMS Pinafore.

In addition to Derventio Brass, he is currently playing with local soul band Groove 66 who regularly perform for private functions and also in local pubs.

Mark has been a member of Derventio Brass since its formation in 1993.