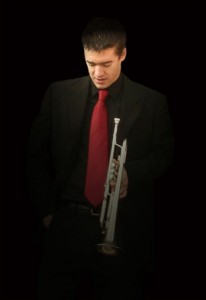 Matt Lax is a versatile Trumpet player based in the Nottingham Area. Classically trained, Matt spends most of his time in orchestras and chamber ensembles including brass quintets and 10-piece ensembles, but is equally at home in big bands, jazz combos, brass bands or theatre pit bands.

Matt is a found member of Essentially Brass, a member of the Nottingham Philharmonic Orchestra and Derventio Brass as well as playing for many of the choral societies in the region including Nottingham Choral Trust, Nottingham Bach Choir and Nottigham Harmonic Society.

Matt’s studied at the University of Nottingham and has remained in the area since his graduation in the summer of 2003. Whilst at University, Matt studied with Gordon Truman. Matt was Principal Trumpet with the two University Orchestras, was a member of two big bands and two brass ensembles as well as various other ensembles.

In addition to playing the trumpet, Matt has also been seen with a Baton in his hand. He was Musical Director of the Loughborough Concert Band 2003 – 2008. He is also one of the organists for St. Mary’s Church, Nanpantan, Loughborough.