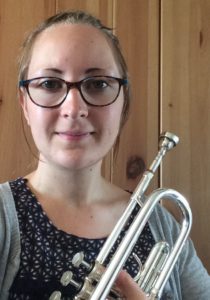 Catherine is a trumpet player from Derby and has enjoyed playing music from an early age. As well as the trumpet, she has studied the piano, violin/viola and singing which she finds all benefit herself as a musician. She enjoys playing a variety of styles including classical, Early music, jazz and musical theatre. Starting in her local music centre, she progressed through the ensembles until she moved to the junior Birmingham conservatoire to further her musical development. There, she played in the brass ensemble, symphony orchestra and wind orchestra as well as singing in the chamber choir. She also had lessons with Alan Thomas who helped her to successfully audition for several music colleges and allow her to keep working towards a musical career.

She has graduated from the Royal Northern College of Music in Manchester and has completed a year’s exchange at the Norwegian Academy of music in Oslo, Norway for a year as part of her degree. She has played in the NMH Symphony Orchestra, Sinfonietta, Chamber Brass ensemble, and Wind Orchestra as well as competing with a championship wind band ‘Vestre Aker Musikkorps.’ She studied with Anthony Plog, Jonas Haltia and Tine Ting Helseth throughout the year.

Catherine has also been a member of the National Youth Wind Orchestra of Great Britain, and in many different ensembles at the RNCM. In the past, she has played with many youth ensembles including the City of Birmingham youth symphony orchestra and the Derby City and County youth orchestra and wind band. Alongside these, have been other ensembles such as the HotHouse Jazz Big Band (formerly EMYJO,)  Derventio Brass, Loughborough Orchestra, Derby Concert Orchestra and the Helix ensemble. These have all played a big part in her musical development. After Graduating, she hopes to freelance within the musical theatre industry and teach to inspire the next generation to enjoy playing music.