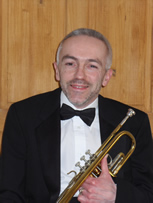 Mark came to the trumpet later than some, as he didn’t start to play until he was about 14 years old. He had taken up playing the bugle in a Boys’ Brigade band and then one of his friends persuaded him to join the local brass band, where he learned to play the cornet. He also played the trumpet in the school band and went on to join a local big band, at which he met a flute player called Hazel, who is now his wife.

This formed the basis for a very enjoyable amateur musical career, during which Mark has played with various brass bands, amateur orchestras, brass ensembles, pit bands and big bands. He has played at some prestigious venues during this time, including the Albert Hall and St. Paul’s Cathedral. He is a founder member of Derventio Brass, having been recruited in 1993 by David Blackwell to play on the first tour to Venice. Mark has developed his playing of the flugel horn whilst playing with Derventio Brass and enjoys the extra dimension this brings to his playing.

High points in his playing career so far include performing the brass ensemble arrangement of Pictures at an Exhibition with Derventio Brass, Mahler’s Fifth Symphony (not the first part though!) with Leicester Symphony Orchestra, and playing in the pit orchestra for Les Miserables (school edition) for Act One, who are a very talented group of 10-18 year olds, which was conducted by his wife!