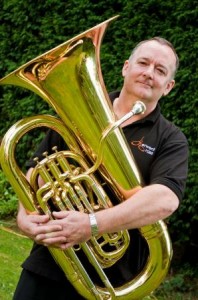 Neil began playing the Euphonium at age of ten whilst living in Cornwall. A move to Surrey saw a brief flirtation with the French horn in the local school orchestra before sensibly moving onto the tuba and migration to the local town band in Godalming.

At the age of sixteen the option of continuing a musical education was shelved to purse a career in Forestry. The musical bug has remained though and Neil has been a member of a number of brass bands in both Cumbria and the Midlands whilst moving around the country following a number of management postings in the Forestry Commission. Three consecutive trips to Malta with the English Festival Brass were a musical and social highlight whilst studying Forestry in Cumbria.

Neil’s longest spell (18 years) has been with Derwent Brass, a championship section brass band based in Derby.

Neil was invited to join Derventio Brass in 2011 and has thoroughly enjoyed the camaraderie and musical repertoire of the ensemble.