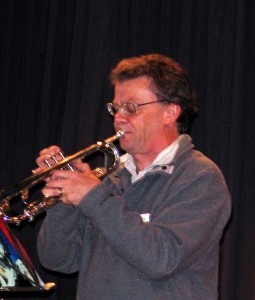 Trevor has enjoyed making music from his very early years at Primary School. He progressed from being quite a competent recorder player at school to the Trumpet and was taught by the local Peripatetic Teacher, Joe Blewitt.

His playing career has progressed through being a member of the North Riding of Yorkshire Youth Orchestra, Stape Prize Silver Band and the TA Band in Scarborough. He has also been Principal trumpet with the Leeds Symphony Orchestra, Huddersfield Philharmonic and has performed on a number of occasions with the Hallum Sinfonia and Westmorland Symphony Orchestra under Arthur Butterworth.

Since moving to Loughborough where he became Head of Instrumental Music at the Loughborough Endowed Schools, he has been an active member of the Charnwood Orchestra, Helix Ensemble and of course Derventio Brass. One more string to his bow is that he is the conductor of the Loughborough Orchestra.

Now in retirement he is enjoying making more music and spending my time on his photography.